The roads are a battleground: cars, cabs, trucks, buses and thousands upon thousands of scooters fighting for space; all, seemingly, blaring their horns at each other simultaneously .

Our cab ride to the station at Hue, to pick up the next leg of the Reunification Express, immersed us into this now familiar tangle of traffic. On one side: ten-ton trucks bearing down on us, bellowing like stampeding rhinos. On the other, swarming scooters, puny tooters– like a lamb’s bleat. They’re almost brushing against our passenger window, overloaded with texting teenagers; farmers with livestock, workmen with planks of wood, and families of four–toddlers sandwiched between parents; squashed, and hatless.

Maybe being off these roads and back on the tracks would be calmer. We stumbled out of the taxi ….but into into another melee : brightly coloured stalls lining the platform, traders noisily offering every conceivable item a passenger might need, and  a few that they didn’t : Crisps and sweets, drinks and biscuits…. bottled vegetables, books, Biros, loo rolls, even. Another honking horn signalled the pure circus that accompanies any train’s arrival here. There’s no lugging bags up steps and over footbridges. The tracks lie at platform level, side by side, and passengers stroll across them to board their train. Before that, though, there are others disembarking. 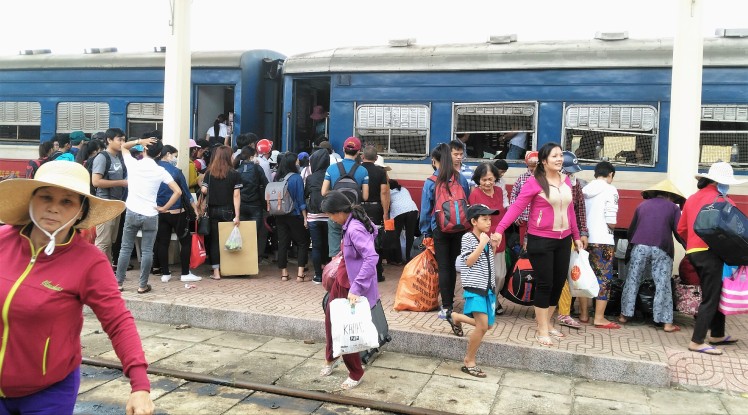 We watched passengers clambering down from the ‘hard seat’ carriages: the ones with  removable metal grilles as their ‘air conditioning.’ Handy on arrival, we noticed, as suitcases, sacks of rice, bundles of vegetables, a pack of cat litter…. and even musical instruments were handed out of the Reunification Express’s window to friends outside.

Boarding; finally, after an hour’s unexplained but entertaining delay, our hope for some respite from the chaos were dashed. An elderly man; nursing a toothpick; his shoes and socks peeled off for comfort; was settled in one of our booked seats: which he’d set, expectantly,  to ‘reclining’ mode. Spotting our dilemma, a fellow passenger chastised the man in noisy, aggressive Vietnamese, sending him, barefoot and grumpy, into another carriage. Seated, we sighed; aiming to read a bit, and catch some glimpses of the stunning coastal scenery near Da Nang. Until the in-carriage TV started blaring out an entertainment channel: comedy and Vietno-pop.

I looked away, longing for peace, gazing out at tiny shacks lining the track; many of them bedecked with rows of washing in the searing sun; polo shirts; sheets and socks, children’s cheeky cartoon T-shirts strung up like bright bunting.

There was a  double-jolt; then a hard stop.

Then the unfamiliar sound  of silence.

After ten minutes or so, there was a crackly tannoy message in Vietnamese, which left us none the wiser.

Then, a team of train guards burst into the carriage; anxious; urgently explaining something. One of them held out his peaked cap; and now passengers were scrambling for cash from their pockets, purses, wallets. They were stuffing the notes into the cap. And watching as the train team ran out again.

It was an Australian man who told us.

Our train had hit a child. A boy, of about 12. He’d died. A child had died. And now the crew of the train that hit the boy, were collecting cash, for the young victim’s family. Cash, in a peaked cap. Kind, or crass?

We had a hundred, unasked questions. About the boy.  Had he been playing on the track? Trying to cross it? Did he die alone? Was his mother there…the police…the paramedics? Questions about blame, causes, investigations, forensics….a traumatised train driver, surely?

But, astonishingly,  within twenty minutes or so of the collision, the train rolled on. We were incredulous.

Nigel’s seen more of poorer countries than me, and we had a whispered conversation about what he’d experienced elsewhere … tragedy being met with immense sadness but also a resigned ‘it’s God’s will’. Is that what had happened here? Was this one of the heart-punching moments that underlines how travel really can change you; help you to understand a different culture and question your own?

We sat in the silence we’d craved–the wrong kind of silence. The train gathered speed towards the misty city skyline of Da Nang. Past more shacks. Little gardens. Dusty yards. Washing lines. Lines of clothes. Children’s clothes. Clothes for mothers to unpeg and fold. Clothes for a boy who couldn’t come home.

What turned out to be a sad journey was the second leg of our trip along the Reunification Express, from north to south Vietnam: a mix of day and overnight trips along this route.We have two days in Hoi An now, before continuing south along the Reunification route and then flying into Cambodia–the final country in our whistlestop round the world tour. Rail travel has played a key part in our adventure–from the luxury of Canada’s Rocky Mountaineer at the start of the trip, to the stunning, streamlined efficiency of Japan’s Shinkansen, or bullet train service.

We’d love to hear your experiences of rail travel around the world–share your story.

9 thoughts on “Life and death on the Reunification Express”