Time of year: January 2017 – minus five degrees during the day, with snow on the ground.

Purpose of trip: Nigel had decided to partake in some ‘health tourism’ in Slovakia as he needed some heavy duty dental treatment. We thought that we’d make a break out of it, as there needed to be 3 days between appointments.

Why we chose this place: The Danubius hotel chain invited us to try their Esplanade resort in the spa town of Piestany, where Nigel’s treatment was taking place.

How long we stayed: We stayed three nights

Our accommodation: The Esplanade is one of eight hotels owned by the Danubius Group in Piestany. It’s a large 4* hotel, originally built in 1981. It is undergoing a floor-by-floor renovation, with another 76 upgraded rooms coming on stream in March 2017. We were shown an example of the old-style rooms and our recommendation is definitely to take an upgraded room. We stayed in a Premium Plus Double.

The ENORMOUS Balnea spa complex sits connectedly between the Esplanade and its sister hotel, the Splendid. A spa in Eastern European countries is much more widely regarded as a medical rather a beauty establishment and, indeed, doctors and nurses were in attendance, with a wide variety of diagnostic tests on the menu. The Balnea spa could handle well over a thousand treatments per day, from massage, to mud treatments, to hydrotherapy.

Service: Staff were courteous and understated – attributes that appealed to us. All requests for help were efficiently dealt with. The area gets very few native English-speaking visitors, but the standard of English of the staff was extremely good and we had no difficulties making ourselves understood. There was also much delight at our attempts to say thank you in Slovakian – Ďakujem!

Location: Piestany is about 60 miles from the Slovak capital, Bratislava. It is a spa town, well-renowned for its hot springs and therapeutic mud, which rise to the surface on ‘spa island’. The Esplanade is on spa island, which is only a quarter mile walk over the ‘glass bridge’ to the centre of Piestany.

Food: We were staying on a full-board basis. All meals are buffet-style and we found the range of options to be sufficient to keep us satisfied for our short stay. There are a la carte restaurants in the complex, which we did not try. The town centre has a range of cosy restaurants and we had a delicious dinner, accompanied by a fine Slovakian Riesling, at Le Griffon.

What we paid: As mentioned, we stayed as guests of the hotel. The bed and breakfast rate for our room-type is typically EUR 100 per person per night in low season. For a half board package that includes a medical consultation and 1-2 treatments per day costs EUR 121 per person per night. These are rack rates and a quick look at the Danubius hotels Offer Page reveals some very good value packages.

Activities close by: We were staying at the Esplanade in the depths of winter. We had a lovely walk around spa island and into the town centre. But temperatures with a wind chill of minus 10 meant that walking was punctuated with frequent stops at coffee shops (of which there are many). Staying at the Esplanade is really all about the spa facilities, which included a wonderful outdoor pool, with naturally heated water at 30 degrees Celsius, making it comfortable against the snowfall. 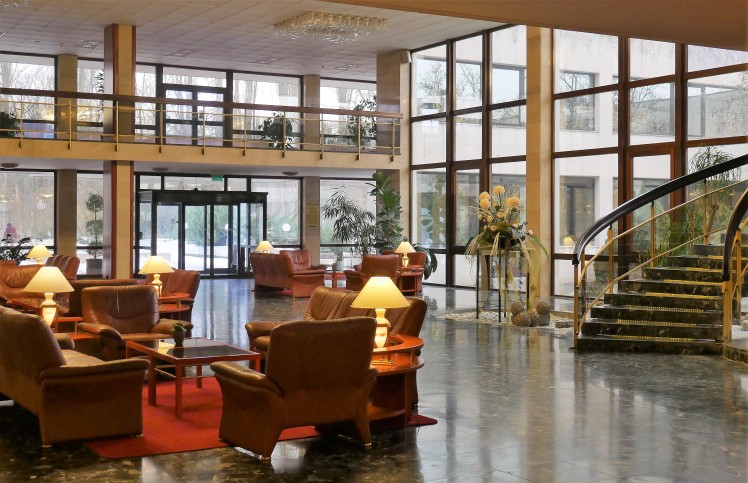 What empty nesters might really like about this place: The Esplanade was built in a different time – one where workers would be granted a week’s holiday by the Party. But times have changed. Whilst the architecture might be deemed functional, it is rather grand with large atriums and much polished concrete and marble. View it as an artefect that we wouldn’t necessary see the like of in English-speaking countries, and it takes on a new meaning.

Another perception that you might need to re-calibrate is that of ‘spa’ as being luxurious pampering. Whilst the treatments that we had were relaxing, we definitely felt that the mud packs and the massages were ‘doing us good’, rather than making us feel temporarily indulged.

Our advice would be to come in winter. It’s cheaper and way less crowded than it would be in the summer and you can have those aches and pains worked on and admire the snowy streets of this pretty town.

What empty nesters might not be so keen on: As touched on above, this is not the equivalent of going to Champneys. If that’s what you want, you will be disappointed. But if you come with a different mindset you can enjoy combining some healthy treatments with learning a bit about a little known country.

In the interest of disclosure, we received a a three-night stay from Danubius hotels on the promise of writing a review. If we had had criticisms about any aspect of the accommodation or the service, we would have written about it. For more on our disclosure policy, read here.