‘You know what I feel like?’ my juddering voice shouted to Nigel, one hand gripping the  tuk tuk’s plastic bench seat like grim death, the other clinging claw-like to the  front ‘safety bar’. ‘I feel like a real travel pro, now ‘.

His mocking reply was drowned out by Colombo’s roar; its dusty city centre rush hour enveloping us in this dash to find dinner; a swerve here, a toot of the horn there, a gasp from me every few seconds as we avoided grazing other taxis, trucks and pedestrians.

But I felt braver here; somehow, after our baptism of fire on the crazy streets of Vietnam and Cambodia last year. There were far fewer scooters, for a start, and despite the cacophony around us, Colombo felt well ordered, clean, colonial.

Our ‘big trip’ for 2017 had started off at a cracking pace and showed no sign of easing up. We’d arrived late at Heathrow, so were bustled through check-in. Seven hours later, we joined an escorted sprint at Dubai to make our connection to Colombo; our forty minutes in the middle east a hazy blur of oil terminals and sandy suburbs viewed from the air.

And so, another six hours later, this was Sri Lanka. The grim faced customs official and a starkly-worded airport poster warning drug traffickers that they faced the death penalty were soon forgotten as our taxi driver, and now this most skillful of tuk tuk chauffeurs, started proving how welcoming this place can be. Only moments after jumping out to find a restaurant, we were greeted by a local who had a hunch (by this time we were seriously sleep deprived and without our guidebook…) that we were new in town. Extending his hand, and his lanyard (he was a city bankworker..) he took two minutes to convince us to jump back into another tuk tuk and to trust its driver–quickly briefed by the bank worker–to take us to an open session at the city’s best known and much loved Buddhist temple, Gangaramaya .

Here, the driver turned tour guide, as we marvelled at the calm spirituality of this city oasis, housing a vast range of cultural and religious artefacts, its famous sacred fig tree, and an eye-watering treasure trove of donated gifts: from two vintage Rolls Royces to hundreds of gold and glistening watches, porcelain, pictures and even hifi equipment left here by people keen to support its work and role in the community.

Sensing we were impressed, our smiling driver whisked us back into his vehicle for a whistle stop tour of the city centre: from its monuments to its independence in 1948, to a statue of its first post Independence prime minister, and on past government buildings, the hospital, and a vast new, Chinese funded theatre. Two hours later, wilting a bit, we 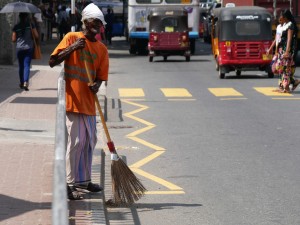 asked him  to drop us  at his favourite place to eat: a basic diner/sports bar (I was the only woman…) where we had a huge, delicious feast of chicken and rice, with a fish curry side, with beer and Sprite, for under a tenner.

So: first impressions of Sri Lanka?  Colombo’s a noisy, bustling city–but a city of smiles, where everyone’s been welcoming, charming, and helpful. And after the cool, wet weather we left in the UK, the heat and humidity are certainly a contrast. But Colombo has proved an exciting,  mouthwatering appetiser for the two week tour of the country that lies ahead.

Been to Colombo? We’d love to hear your impressions below.

To make sure you don’t miss a moment of our Sri Lanka tour, the best way to join us is to subscribe to our monthly newsletter. Just fill out the form on the top right of this page and we’ll send you our latest travel inspiration, stories and tips.

One thought on “Colombo – a great introduction to Sri Lanka”