There were men in ties in Tissamaharama. Ties, in the midday sun. The clear sign of brisker business than we’d spotted at the straggles of roadside stalls selling coconuts, watermelon and fairly fresh fish along our long and dusty route. My stomach churned a bit at the realisation that we were closing in on our destination: Yala – one of Sri Lanka’s most popular national parks. In only a few hours, we’d be strapped into a Jeep and whisked off on safari.

I’d been in two minds about this. I’ve seen my fair share of zoos; as a child, and as a parent. And while I understand their role in conservation and education, I’m never that happy seeing animals in captivity.

But nor was I that comfortable about the concept of ‘bothering’ some of the most beautiful creatures in the wild, in their natural habitat. I’d heard about hoards of snap-happy, long lensed tourists clogging up the routes through some game parks and wasn’t sure I wanted to be one of them.

OK. And in all honesty, I was a bit scared about the thought of being in an open sided Jeep, wafting the heady aroma of human flesh close to some of the sharpest teeth in town. Not quite as terrified as Dorothy’s “Lions and tigers and bears…oh my” scene in the Wizard of Oz, but not far off.

The first sight of a large, leering crocodile, sleeping in the sun soon sorted me out. We were far enough away to admire his dangerous, ugly beauty in safety. Him and three others close by. A spoonbill here, an eagle there, half a herd of wallowing water buffalo. This was gripping. A half-metre long monitor lizard disappearing into a tree hole to raid bird’s eggs, three kingfishers, a flash of stunning bee-eater birds and a host of cheeky roadside monkeys later, I was juggling binoculars, long distance shades and my camera phone like a pro. 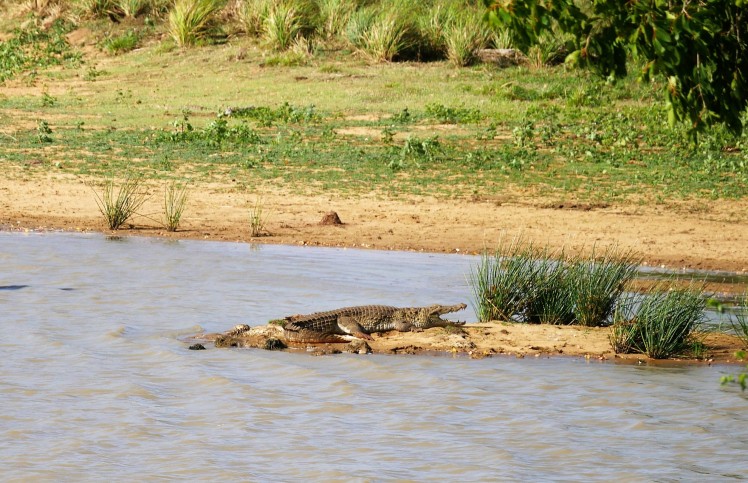 We moved on, through narrow, twisting jungle paths where, I guess, I’d imagined a leopard or two leaping out at us. No leopards spotted on this trip, but, with an experienced driver and wildlife tracker on board with us, I felt no sense of fear, either. 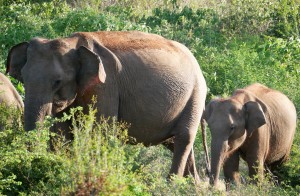 What I did feel, minutes later as we stopped in silence in front of a group of feeding elephants, was an overwhelming sense of wonder, and affection for these incredible animals. I homed in on two ‘babies’–one passing a clump of grass to its sibling, trunk to trunk; and felt  unexpectedly close to tears.

The package each side of this safari made this whole experience unforgettable: waking up the next morning under canvas to a dawn chorus of Indian robins, crickets, cicadas, peacocks and screeching monkeys confirmed it: I’m a convert. In two minds about safaris? Go see.

If you liked this post, the best way to join us is to subscribe to our monthly newsletter. Just fill out the form on the top right of this page and we’ll send you our latest travel inspiration, stories and tips.

2 thoughts on “Tears, but no fears, on my first time safari”